I think my ultimate goal when it comes to dinnertime is to create recipes that are fast, appeal to everyone, and require minimum clean-up. Getting a dish that can tackle all three of those requirements is easier said than done, but when I find one that works, I pretty much feel like Super Woman. I’m excited to report that the recipe I’m sharing today is one of those elusive speedy, one-pan, crowd-pleasing dinner ideas. I saw al fresco Mild Mexican Style Chicken Sausages in the grocery store and they inspired this dish, which is a marriage of two crowd pleasers – it’s one-part quesadilla, one-part pizza. 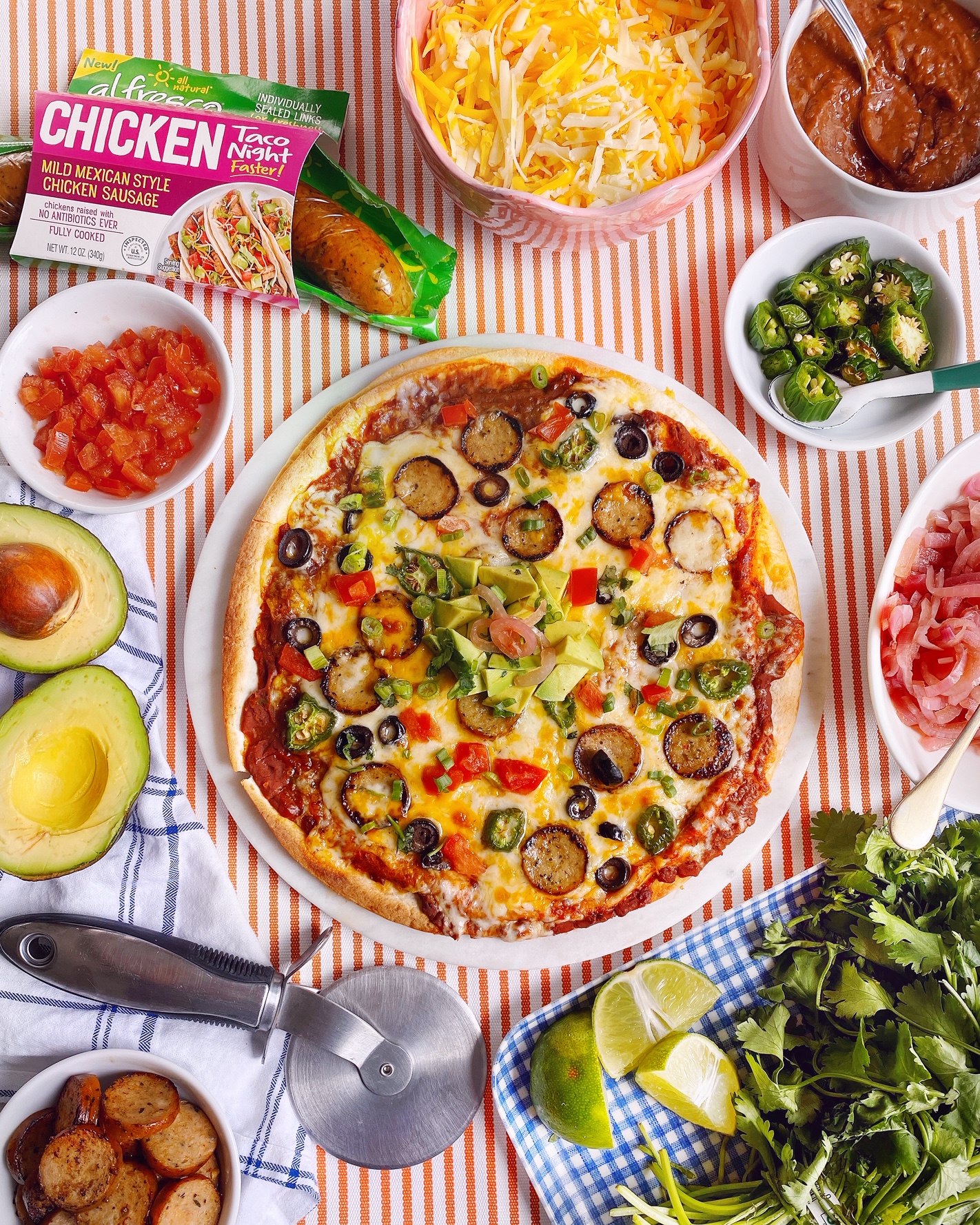 For this Mexican Sausage Quesadilla Pizza, I used one large cast iron skillet to do all of the cooking and keep my post-dinner dishes to a minimum. In the skillet I crisp up slices of the al fresco Mild Mexican Style Chicken Sausages, then remove them and build the quesadilla-pizza in the same pan. The sausages are always a staple in my fridge and this new variety is made with hatch chiles and classic Mexican spices (yum). They are also fully cooked, so it cuts down on prep-time, which is ideal for weeknight dinners! 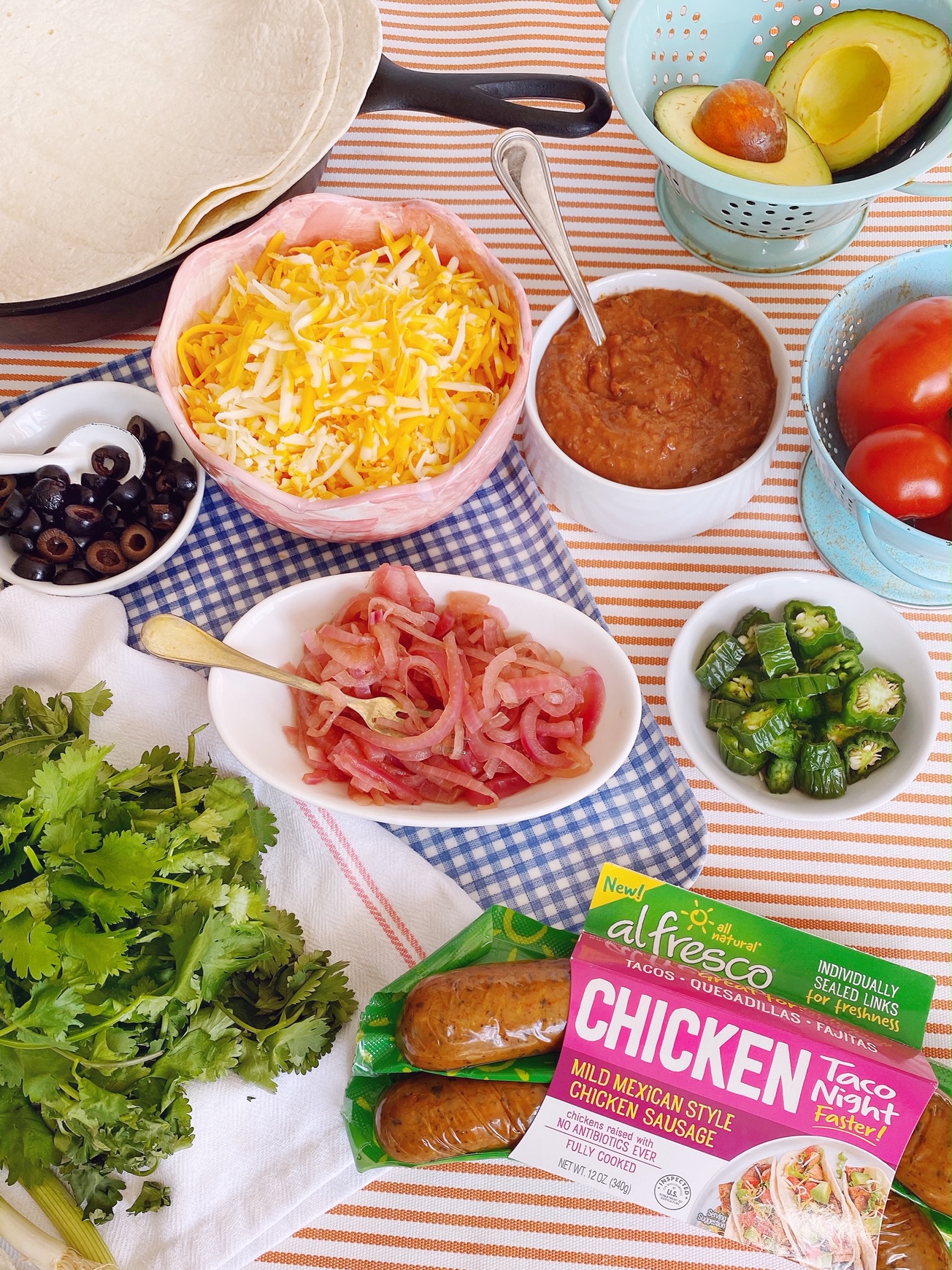 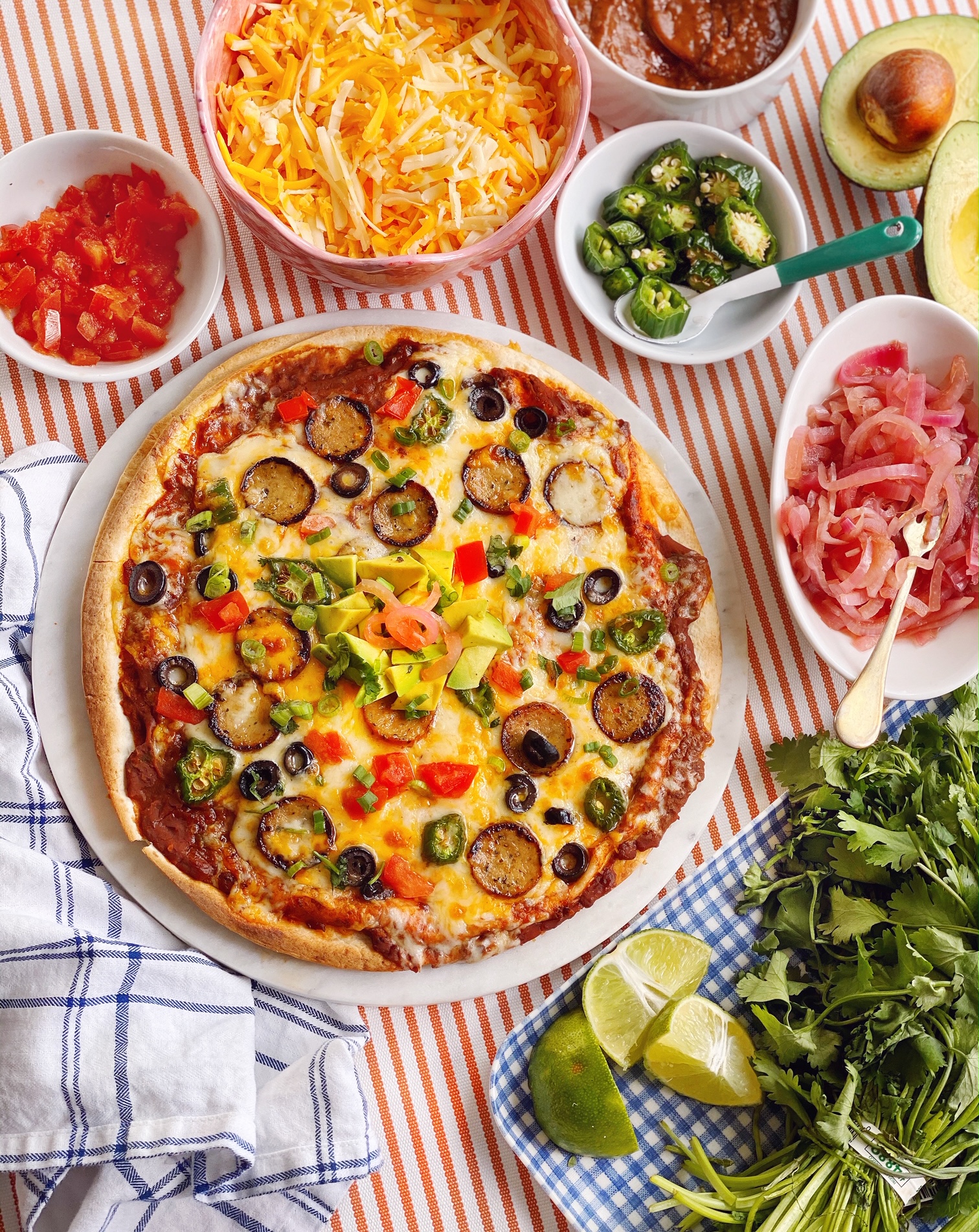 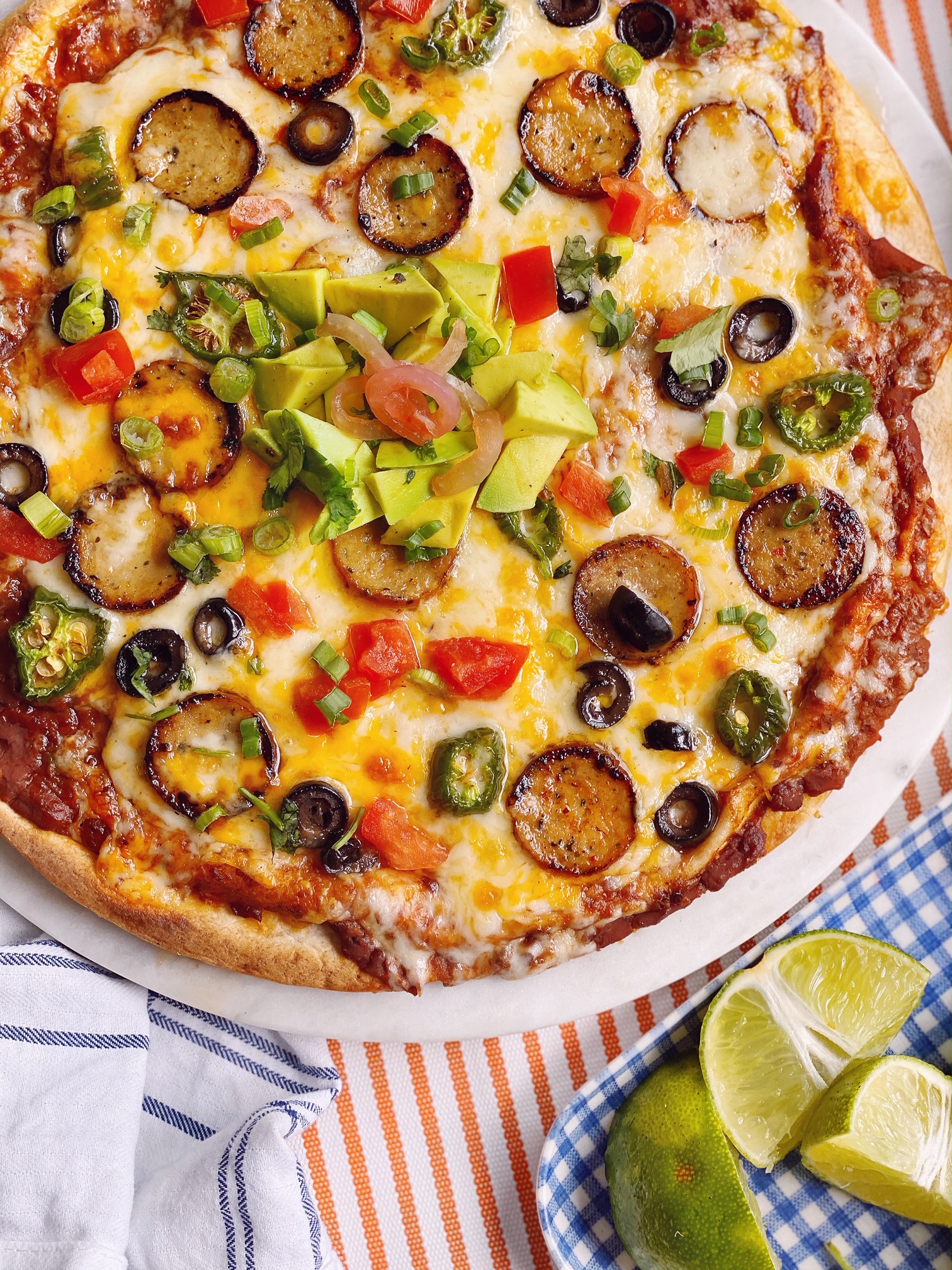 In the skillet I layered tortillas and cheese and spread some refried beans on the top layer of tortilla before piling on the toppings. The flavorful cooked the al fresco Mild Mexican Style Chicken Sausages get spread around the top of the quesadilla pizza, along with jalapenos, black olives, and more cheese. Then it bakes right in the skillet for about 10 minutes, and then finished off with the remaining fresh toppings like avocados, pickled onions, diced tomatoes, and scallions and cilantro. In under 20 minutes you have a dinner on the table that is packed with color and flavor – get the full recipe below! 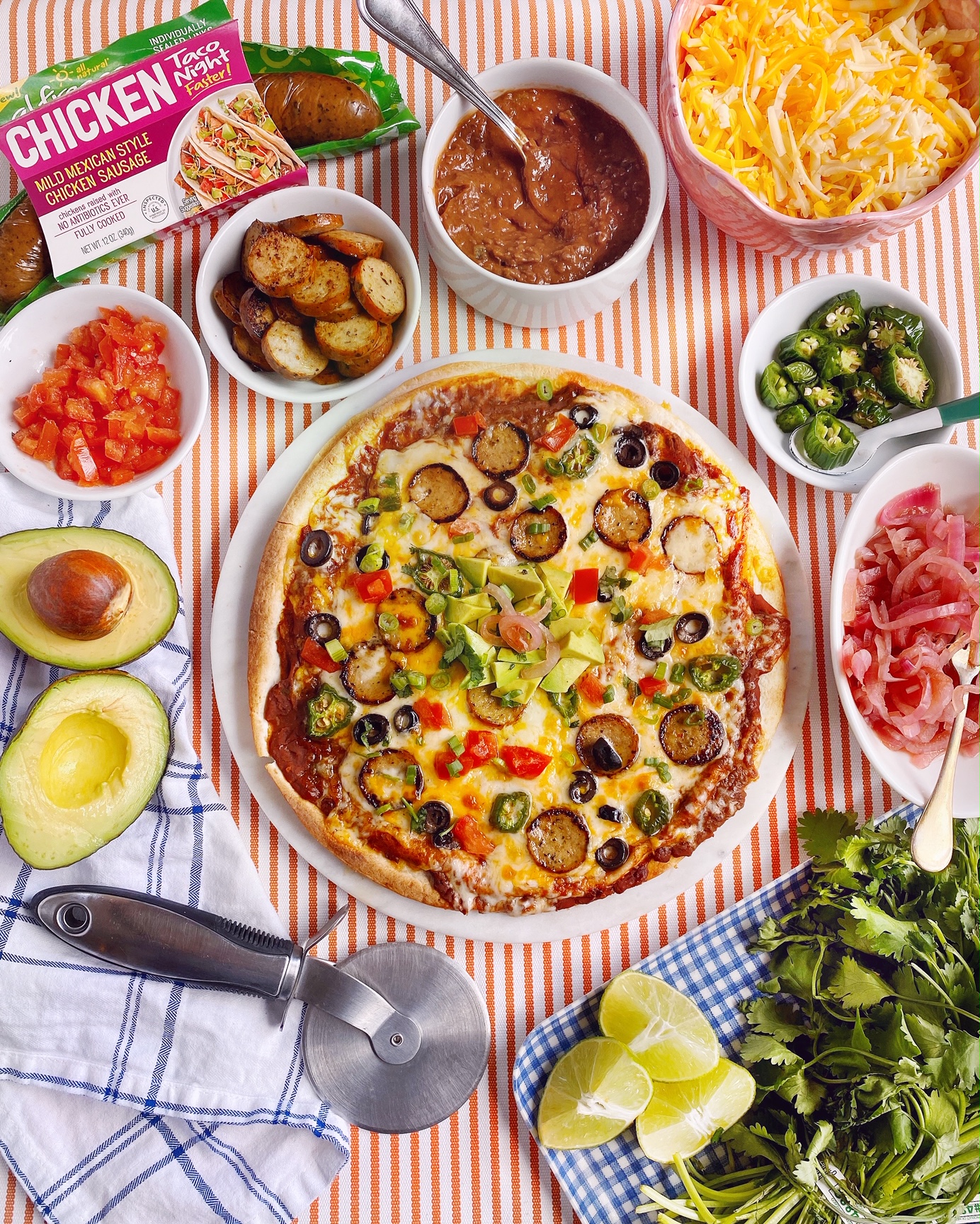 Save Print
Mexican Sausage Quesadilla Pizza.
Ingredients
Instructions
3.5.3251
Please note: This post was created in partnership with al fresco Chicken Sausage. All opinions, images and content are my own. Thank you for supporting brands that support this site.
The Download: 03.03.20 St. Patrick’s Day Party Ideas.