Someone recently commented on one of my instagrams that they were surprised I was able to cook so much with a newborn baby. The first month of Jane’s life I actually barely lifted a finger in the kitchen.  My mom stayed with us for about two weeks and took over most of the cooking duties when we were right out of the hospital. The next few weeks after that we were so lucky to have amazing friends that brought over frozen casseroles and easy to reheat dinners. Once we finally got into a rhythm with Jane though, I really missed cooking and was eager to get back to my kitchen — cooking has alway been my best method for relaxation. Cooking with a baby is a different experience than before, and while I still love to chop and sauté and season, I have to get the whole thing done a bit quicker now. 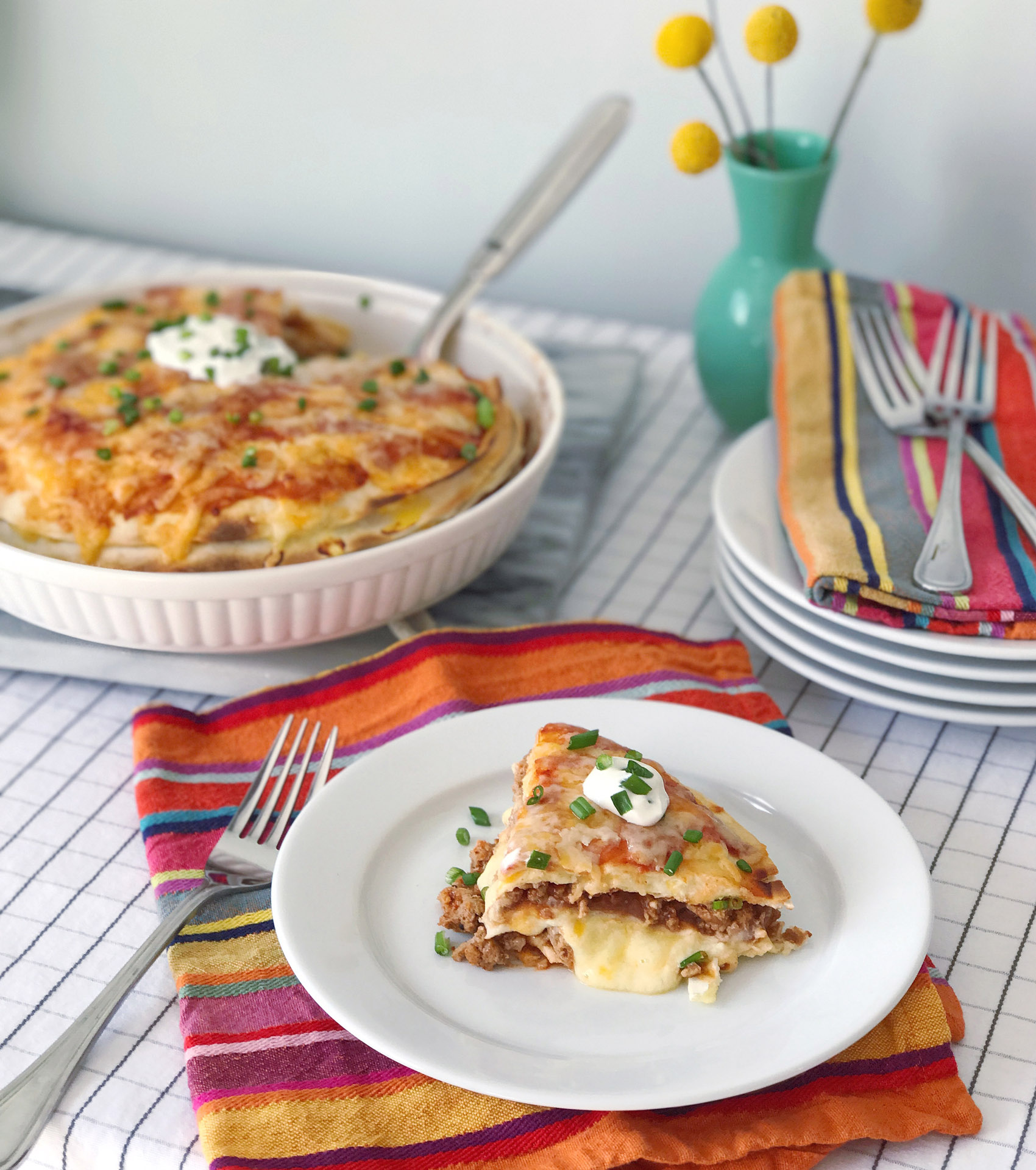 In an effort to get my cooking-zen in each day while juggling life with Jane, I’ve been leaning back on some of my favorite “non-recipes” — the meals that I’ve made so many times I don’t need to pull out the cookbook or google the recipe. They’re the recipes engrained in my memory. I thought I’d share a few more of those weeknight, quick and easy meal ideas here over the next few weeks, starting with one of my family-favorites: Mexican Lasagna. 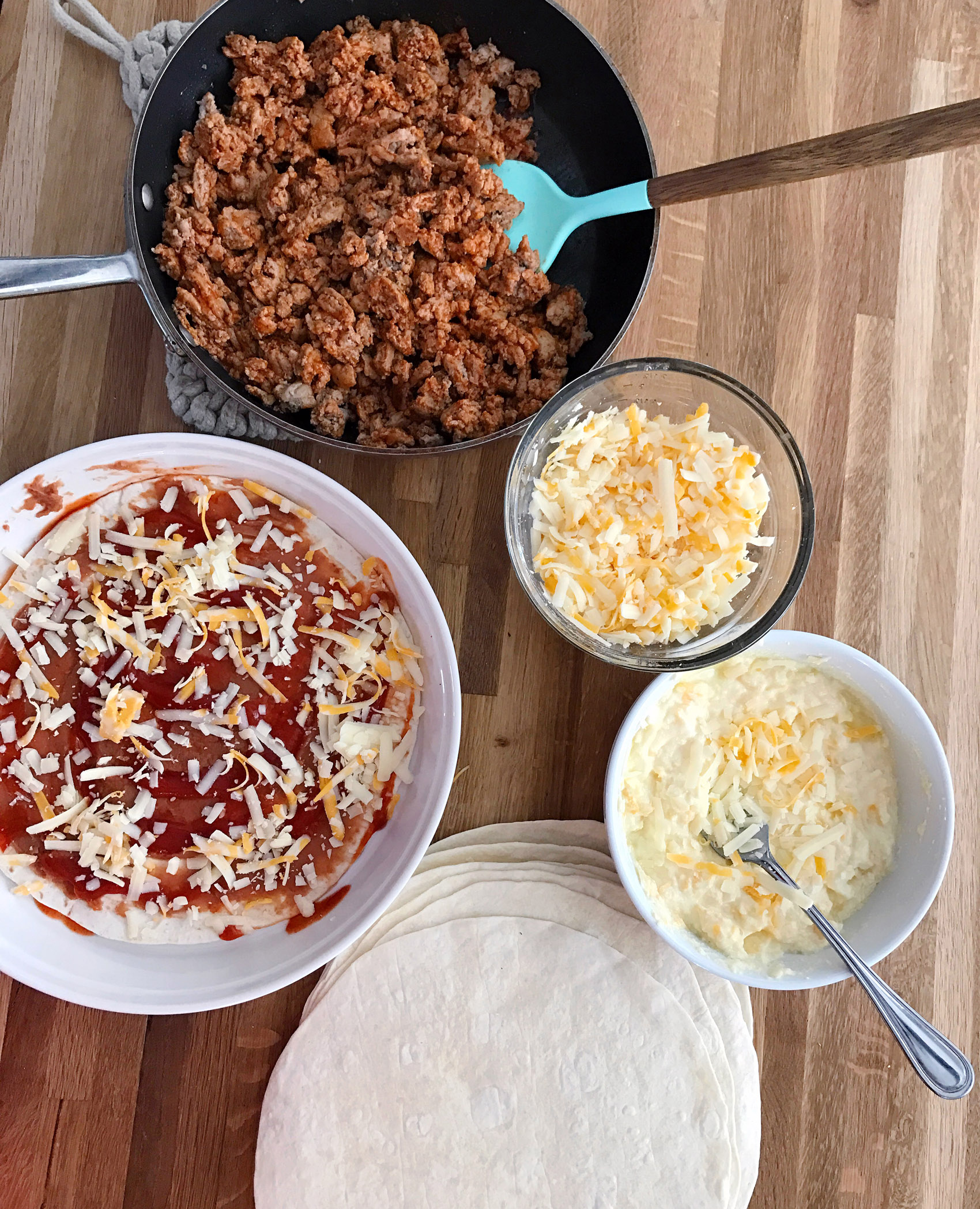 In retrospect, I sort of feel like this recipe should be called Mexican pie, since it’s round and baked in a pie dish. My mom used to make this for us, adapted from a recipe plucked from one of her favorite magazines, and it was called Mexican Lasagna. So the name sticks, because that’s what we’ve always called it! 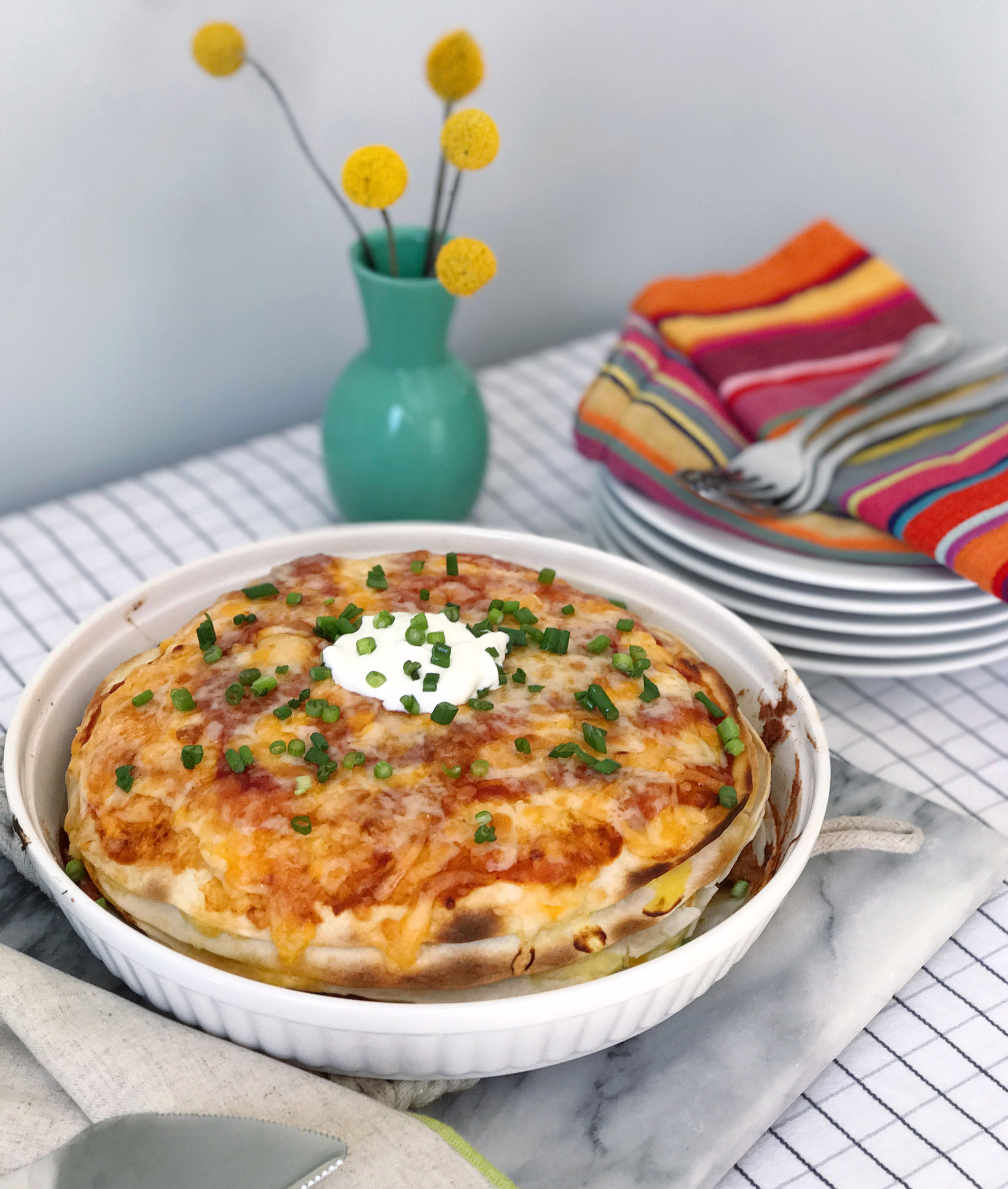 The original recipe is likely on a yellowed magazine page tear tucked somewhere inside a cookbook at my parent’s house, but I’ve played around with the recipe enough that this adaptation is more of my own. It’s a pie-like dish with taco meat, refried beans, and a lasagna-style cheddar cheese and ricotta mixture tucked into alternating layers of tortillas. I bake it all off with enchilada sauce and more cheese on top and serve it in slices with a little extra salsa, sour cream, and freshly chopped scallions. This particular version use ground turkey for a healthier take, but I use ground beef often too. You can also add more or less heat to the dish with Tabasco, chili powder, spicy salsa or hot enchilada sauce. The best part is that it reheats well for leftovers too, I pack up a slice for lunch! Get the recipe below: 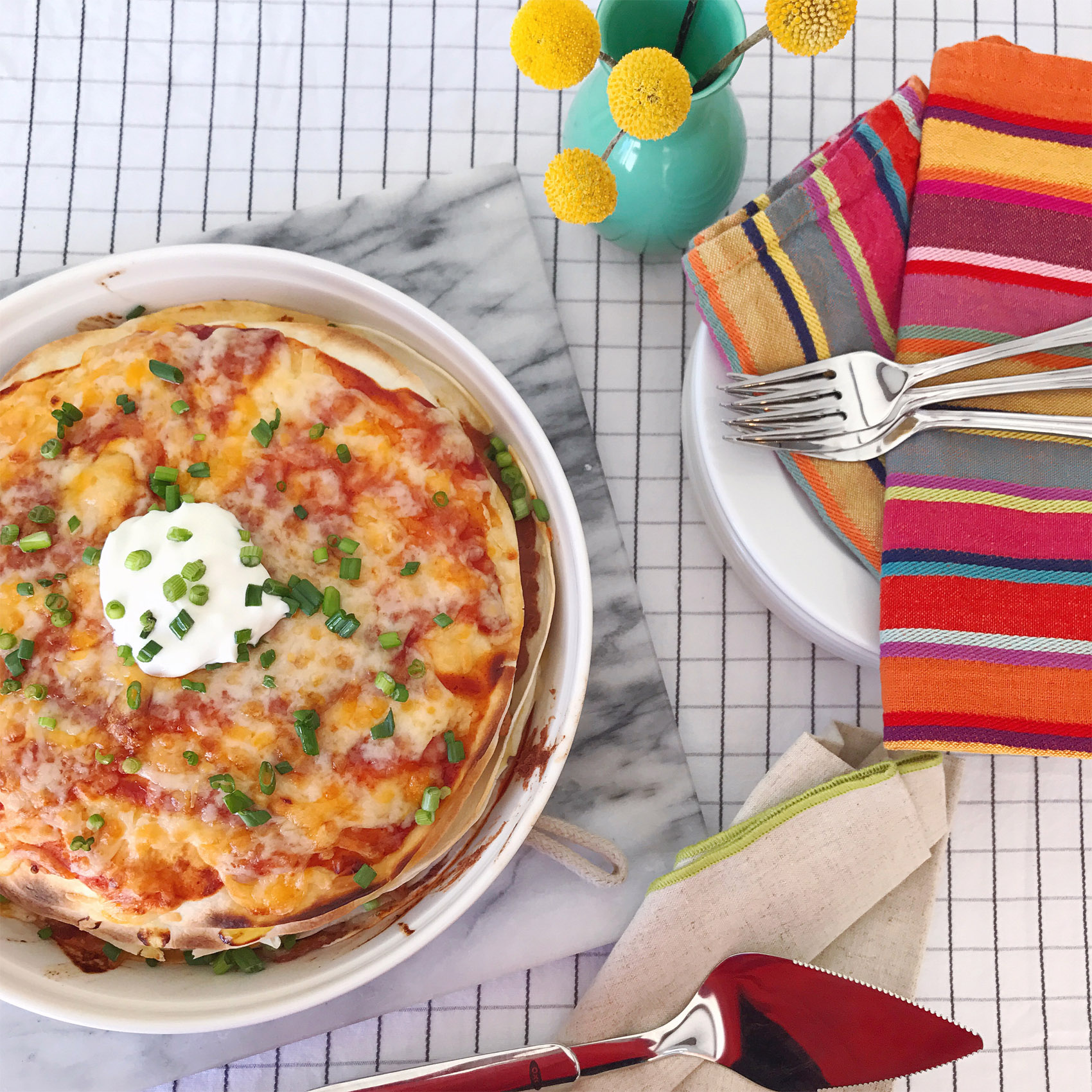 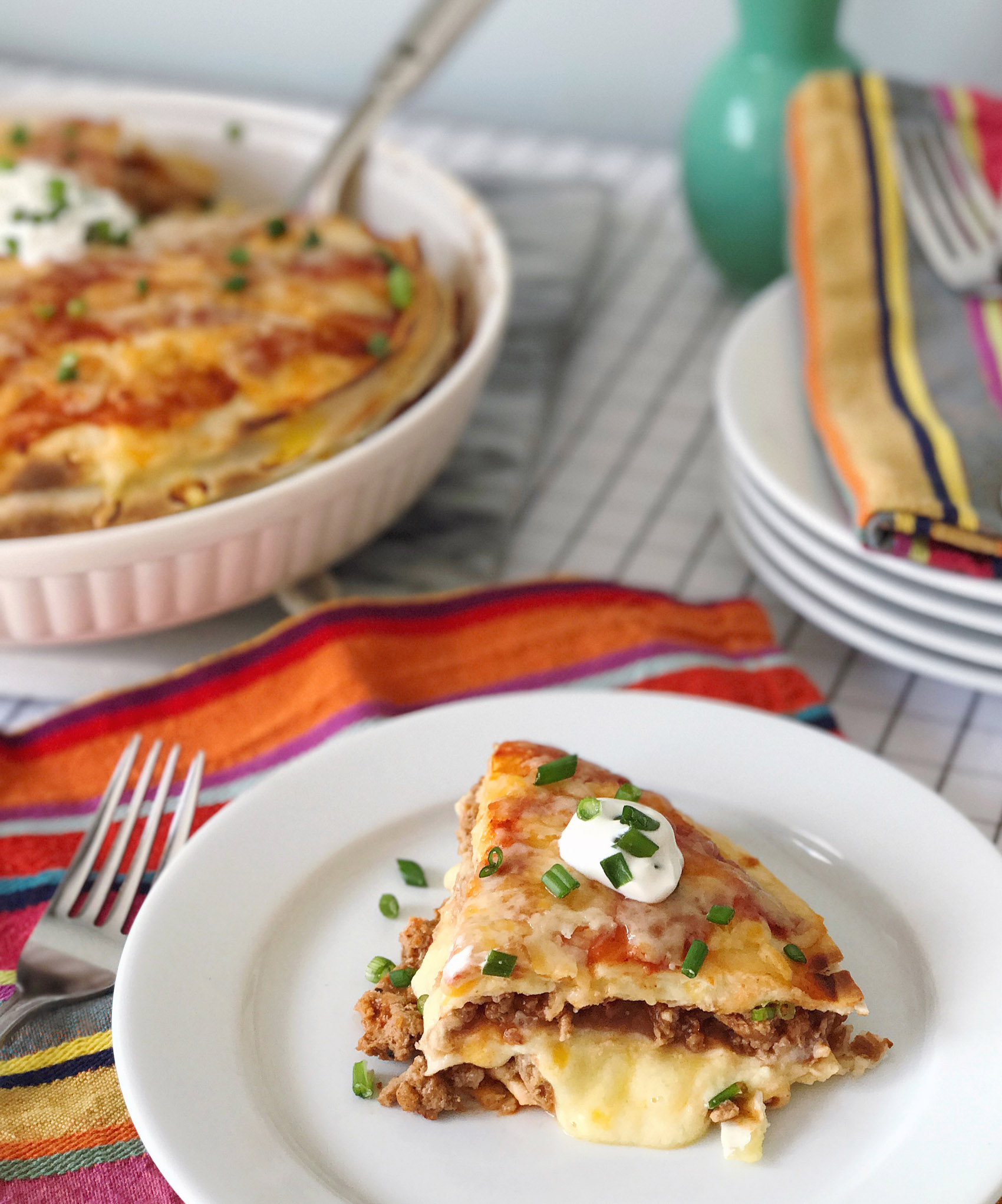 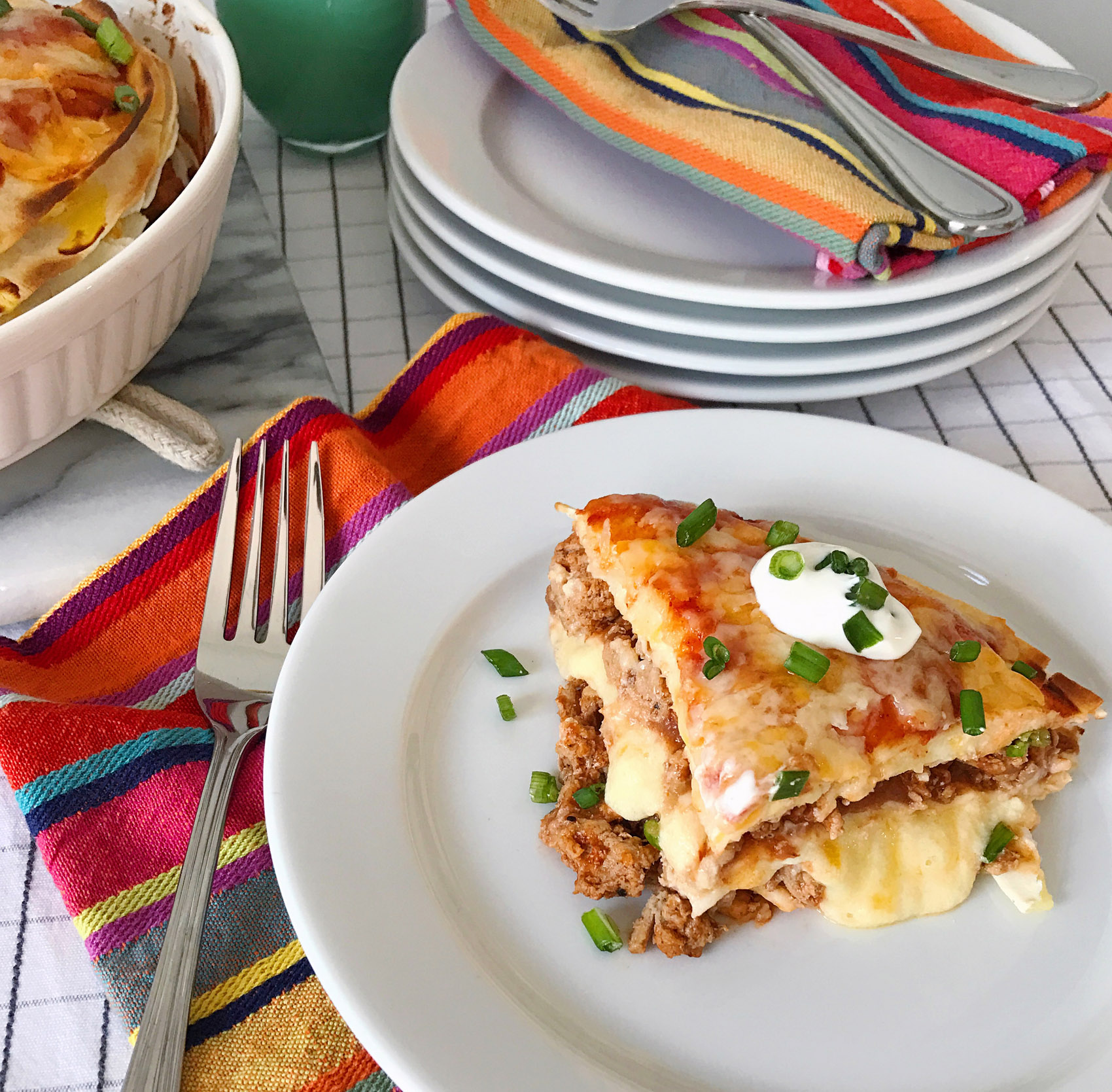